Who moved my Right to Education!

Being born a girl has its perks. For one, it unapologetically labels everything she does as ‘cute’ or ‘sweet’. But dare she order people around, in which case the label changes to ‘bossy’ – faster than the cute-one-day-bossy-the-next confused mind has had the chance to reconcile with her colorful attributions.

Don’t get me wrong, I am not demonizing ‘bossiness’, but in the context of the situation and age tenderness, a caustic word like ‘bossy’ can deflate the need to lead in young girls. Sheryl Sandberg famously (and controversially) gave the world a new perspective on being ‘bossy’.

IMO, bossiness is not a leadership trait. But that’s for another day.

The point is, as a society, a culture, a community, we have created differences, more than biology can identify, between a man and a woman (please note: for the context of this topic, other genders are left out of discussion). We have put our men on a pedestal, which from an evolutionary standpoint was perhaps needed, but have missed the boat on women empowerment.

In Women After All: Sex, Evolution, and the End of Male Supremacy, Melvin Konner argues that male domination is an anomaly of human history, not a natural state for the human species. Specifically, Konner suggests that male supremacy is largely an effect of an oppressive social arrangement, namely civilization, which began with the invention of agriculture.

So much so are the documented effects of male supremacy that Wikipedia dedicates a page to ‘Male Privilege’ defining it as a system of advantages or rights that are available to men solely on the basis of their sex. Yes! Just one different chromosome makes a world of difference! These privileges percolate to various areas of life leading to sex differences in education, which is sex-based discrimination in the education system affecting both men and women during and after their educational experiences.

Sample this - Gender differences in educational attainment are largest in South Asia, where 60.6% of men have at least some secondary education, compared to 39.8% of women. Only in North America, Latin America and the Caribbean are girls as or more likely to attend school than boys. In the rest of the world, more girls remain out of school than boys and "women make up two-thirds of the 750 million adults without basic literacy skills”.

Think that’s staggering? The picture gets more muddled at the workplace. Globally, in 2019, less than half (47.7%) of all women participated in the labor force, a decrease from 50.9% in 1990. And while women make up 35% of STEM students globally it whittles down to only 22% of professionals in the field of Artificial Intelligence (AI).

If you were to capture a snapshot of a woman’s life cycle – from childhood to adolescence, from marriage to motherhood to caregiving (to aging parents and other family members), the ratios are skewed towards men - pointing to inequalities in all spheres of life.

We have heard this quote way too many times to reproduce it accurately, but implemented far too less to reap its benefits.

Accordingly to Wikipedia, ‘Despite significant improvements in recent decades, education is not universally available and gender inequalities persist. A major concern in many countries is not only the limited numbers of girls going to school but also the limited educational pathways for those that step into the classroom. More specifically, there should be more efforts to address the lower participation and learning achievement of girls in science, technology, engineering and mathematics (STEM) education’.

When compared with the rest of the world, the female literacy rate is considerably low in India at around 60 percent, which is 22 percentage points below the world average. The figure below shows the stark difference in India’s female literacy not only with the developed countries but also with middle- and lower-income countries like Sri Lanka and Zimbabwe (ref: Firstpost). 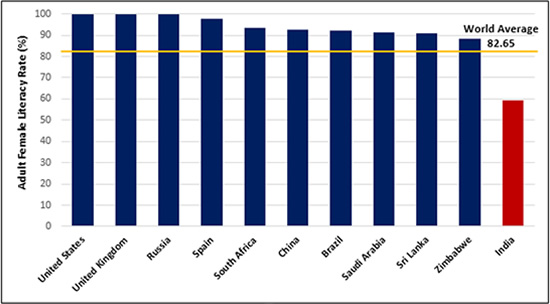 “The education of women and young girls is both a moral prerogative and an economic necessity. Equality is a basic human right, and while as a nation we have made great strides, gender equality still remains an unfulfilled promise for many women in this country and most certainly in our developing countries across the globe. A nation thrives when all of its people can participate and contribute equally to the health and productivity of their citizenry”, says Cindy Estrada, Vice President, UAW General Motors Dept.

The ramifications of illiteracy run far and wide into the nooks and corners of professional aspirations and personal development as well. Put simply, the lack of education among women prevents their participation in the workforce, thus hindering the country’s development. Currently, Indian women contribute only 18 percent to the country’s GDP — one of the lowest in the world with only 25 percent of India’s labor force being women. While just one extra year of secondary education can increase a woman’s income as much as 25% a year, the burden of housework, marital priorities, childcare amongst other things hinder her educational goals.

According to a 2019 study A Leak in the Academic Pipeline: Identity and Health Among Postdoctoral Women, several challenges (e.g., sexism, parental leave, maternity leave, imposter syndrome, the glass ceiling, etc.) disproportionately affect women and thus perpetuate the leaky pipeline metaphor for women who opt-out of their professional journey. Although this pattern can be seen at all levels of the career hierarchy, the postdoctoral stage seems to be a critical time for women facing such challenges, when personal life changes and professional ambitions often collide.

These findings are true for women not just pursuing doctorate studies but are glaringly visible across all industries, geographies and functions. Repercussions of this can be directly correlated to women leadership. In 2018, women represented just over a third (36.3%) of all managers in Australia with a projection that it won’t be until 2039 for women to reach parity in key management personnel roles if the current rate of progression remains constant. The stats are bleaker closer home (India) with women holding only 20% of all senior roles in 2018 and only 7% of senior management (CEO/Managing Director) roles in 2017!

Education as a panacea

Empowerment can be defined in many ways, however, when talking about women's empowerment, empowerment means accepting and allowing women who are on the outside of the decision-making process into it. And a big contributor to this is education.

The Guardian captures this sentiment righty with its narrative, ‘Getting girls enrolled in and completing primary school is the threshold task, followed by the even greater challenge of ensuring girls’ secondary education. Women with a sound education will not only earn more themselves, they will contribute more to their household and national economies. They will also be less likely to fall victim to the scourge of human trafficking and forced child marriages, and be better able to protect themselves from contracting preventable diseases like HIV.’

Beyond the home front, education needs to be the underpinning catalyst for workplaces too. However the current stats on workplace learning for women aren’t too promising. A survey of 1,000 third-party U.S. office workers uncovered some significant differences in the way men and women are exposed to training at their companies. Here are the shocking revelations:

An interview with D2L’s COO and the former SVP at Yahoo and Intuit, Cheryl Ainoa, reveals that “men are more likely to raise their hands, ask what’s available and suggest they’re the right person for the job. As such, male workers tend to be more top of mind when managers think of providing new L&D opportunities to their employees. The unintended result is that women are less often exposed to online training and development programs, regardless of how qualified they are.”

Whichever way the cookie crumbles, leaders have an important role to play in ensuring training and development opportunities are shared equally across an organization.

Innovations in learn-tech with AI-powered Learning Management Systems that ensures relevant content is suggested to the learners automatically as it constantly gathers intelligence from user behaviors, skill-sets and information pieces, goes a long way in not just laying the foundation for equal L&D opportunities to all (yay!) but are easily accessible too (read Mobility).

Content Libraries (like Plethora) offering a diverse and rich repositories of Self-Development, Soft, Business, Leadership and Digital Skills helps in filling the skills gap, especially for women during returnships, leadership pipeline building etc., by not just assigning competency-based courses and videos, but in paving a personalized learning path.

Taking a cue from Jennifer, it seems just about right to start with ‘women’, who have been under-represented and oppressed for way too long!

And why not? A McKinsey Global Institute report found that if women’s equality were advanced, it could add an astonishing $12 trillion to global GDP by 2025!

So let’s commit to giving our girls an education while also committing to give the ones who are receiving one the opportunity to progress and make a mark for themselves in the corporate world. One learning nugget at a time!